Julie and I walked around town today, for the first time since our return to Egypt. We were eager to see the changes in our area after the revolution, and took our camera along to share our observations. Much, of course, was the same, but there were many reminders that things have changed. First, the graffiti:

This is the wall to our neighboring apartment building. Before, it had always been as blank and dull as every other wall in the city. Now, evidence of national pride is brimming over everywhere, even if slightly less artistically on a house a few doors down: 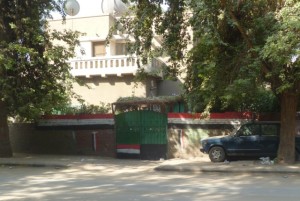 The graffiti continues on public walls: 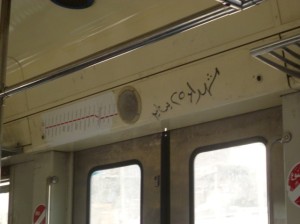 (translation: Martyrs of 25 January [the date of the first demonstration, which has come to label the revolution])

… and even on the garbage dumpsters:

It has been said that this is the first revolution in history that has cleaned up after itself.

The trend continues in advertising: 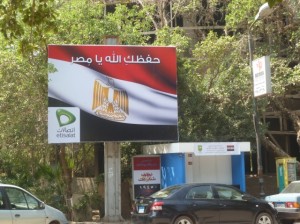 … and while some new shops have opened in town: 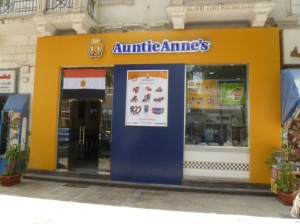 … others have since closed down: 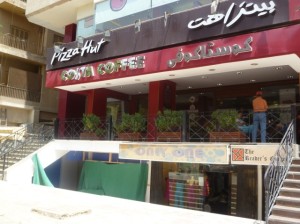 (to the lower left had been a Playmobile store)

Some signs extol the virtue of national unity:

(translation: If I was not an Egyptian, I would wish to be)

… while others promote a particular political/religious vision:

(translation: This country is ours; from this day onward I will honor our Lord in my work; the Muslim Brotherhood [note: ‘ours’ means ‘the people of Egypt’ as opposed to the group itself])

Before the revolution, the Muslim Brotherhood had been a banned, but tolerated, organization. Never would their slogans have been allowed public display for very long. They, like others, are now enjoying a greater freedom of operation. Meanwhile, and not necessarily conversely, others place the Islamic crescent and Christian cross side by side, alongside a heart to validate and honor the two religions of one people.

Finally, there is a reminder of violence and instability: 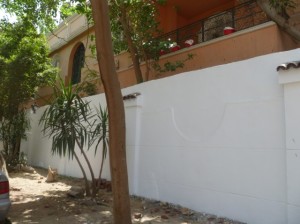 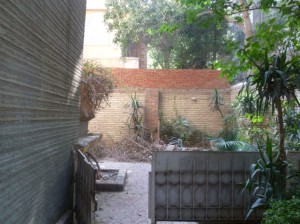 … as our neighbor to the other side has extended his wall six feet higher.

We are glad to be back, hearing the reactions of friends and strangers to the events of the past two months. Mostly all is positive, yet the visual complements the written word of their testimony, which we hope to convey as events continue to unfold. Accomplishments become permanent the more they are translated into memorials. After a scant eight weeks, the popular effort has already begun.

One thought on “Observations and Photos, post-Revolution”