Last Saturday, our family of five joined a busload of Egyptians for an all-day trip to two monasteries.  This was the first trip we took like this since Layla joined our family a year ago, but Jayson has traveled with many from this group on several.  While these outings are great opportunities to see different parts of Egypt and also to interact with Egyptians on a deeper level, being out all day long with three young children can also be exhausting.  We often have to weigh these two thoughts to determine if a “rihla” is worth taking.  Obviously, we decided to be adventurous and give it a go this time.

Here is a little glimpse into our family’s experience on this latest rihla.

The bus was to leave from the bishopric church in Kozzika, just south of Maadi, by 6:45am.  We assumed that the bus would not leave on time as punctuality is not the most important trait of the Egyptian culture.  However, being the foreigners in the group, and not totally sure how late we could be, we opted to follow our Western ways and be there on time.  Sure enough, we were among the few who arrived on time.  The bus didn’t leave until around 7:30am, although I did hear others complain about not leaving on time.  These “others” however, were not at the meeting place at 6:45, so I’m not sure why they complained.  The fact that we left late didn’t really bother us since we expected it.  And actually, our two older girls enjoyed running around the church grounds as we waited, and being one of the first to arrive allowed us to choose the front seats of the bus to try to prevent the frequent car-sickness our girls’ exhibit.  Further, leaving later actually lined up better for our one-year old’s morning nap which she easily took in her car seat.

Our first stop of the day was to a monastery/retreat center called Anafora, which we learned means “sacrifice.” We had heard of this spot from foreigner friends who sometimes frequent the place for two to three day retreats with their families.  We even heard there was a pool which is sometimes suitable for swimming.  I wasn’t sure what to expect with this so I packed the bathing suits, but didn’t mention the possibility to the girls ahead of time.  This turned out to be a good idea since we never did see the pool to know if it was filled and clean for swimming.

Our first event of the day was mass in the church at Anafora.  At first I wasn’t sure if I would sit through the mass with an active one-year old in my lap, but it turned out to be the best place for our not-yet-walker to crawl around.  The whole place was carpeted with small, colorful carpets. 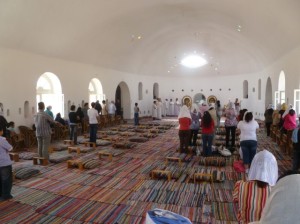 It was a simple, yet beautiful building to take in.  Our two older girls enjoyed playing with their Egyptian peers in various ways throughout the mass, as I continuously looked toward their Egyptian parents to see if our girls were overstepping the expected norms.  Hannah was enjoying conversation with a group of kids, and at times laughed out loud during mass.

At other times, Emma and Hannah were running and skipping around the back of the sanctuary with two Egyptian 3½ year olds from our group.  It didn’t seem to faze anyone too much, but I guess I am just used to Western expectations of children in church services.  I was so glad they were playing happily with the other kids; this is just what I hoped for.  However, I really wanted them to wait until AFTER mass was over.

Urging the kids to 'shhhh'

Meanwhile, Layla kept busy crawling and climbing and being picked up by total strangers.  And a few times, she even visited her Daddy on the men’s side of the church.

When the mass ended, I told the girls they could finally run around.  But once again they had to sit as a woman briefly shared about the church building.

Taking in a lecture

Following mass, I assumed we would eat breakfast.  It is the Orthodox practice to fast until after communion.  This meant that most of those in our group had not eaten breakfast yet and it was now 10:30 in the morning.  I learned, however, that we would first visit the gift shop before eating.  This was followed by another surprise when Jayson told me we were getting back on the bus to drive somewhere else for breakfast.  This was unexpected as I thought the plan was to spend a few hours in this first monastery.  We soon learned that we were just going down the road slightly to another part of this monastery where we would eat breakfast and hang out for a few hours.

The other part of the compound was nice in many ways, but not great for the not-yet-walker.  There was no inside clean floor for her to crawl around on, and so she was a bit limited in her movement.  This part of the complex had a large courtyard surrounded by a shaded area where the tables and chairs were.

This is where we ate breakfast, some listened to a lecture, and kids played.

By about 2:30, we were ready to head to the second monastery of the day, about a 45-minute drive by bus.  This lined up perfectly with Layla’s afternoon nap, although wasn’t quite as long as I would have preferred.  Still, I was thankful for any sleep she had that day.  We had visited this second monastery before and remembered that the church here was also carpeted.  We figured this is where I could hang out with the kids even as Jayson attended a second lecture of the day.  We arrived at the St. Toma monastery shortly after 3pm.

I carried Layla in her car seat into the church with hopes that she would sleep longer, but to no avail.  Still, it was a carpeted place where she could crawl around for awhile.  Unfortunately, the two older girls saw a lot of open space and just assumed they could run back and forth.

Again, being the foreigner, I wasn’t sure what was appropriate, but it didn’t seem quite right to be so playful in the church building.  Many others, after all, were walking around and looking at the icons contemplatively.  I didn’t want our foreigner kids disturbing them.  We soon learned that they shouldn’t be running and playing, and they were sent with the adults to an outside open space where they could play while the second lecture took place.  I stayed in the church for another half hour or so with Layla since she was much less obtrusive in her playing around.

Following the lecture, it was time for lunch.  For us, it was basically dinner time since it was almost 5pm.  The girls had been having a great time all day running and playing with the other kids from the group.  One of the great things about the monasteries is that they provide lots of open space where you can feel safe letting the kids run around without them being able to get lost.  The girls got lots of exercise and made some new friends, and this was great to watch.  Had Layla been able to move around on her feet more, the trip would have been even more enjoyable.  As it was, we found creative ways to let Layla move in relatively clean environments.

But back to lunch/dinner.  The man who organizes these trips often likes to bring the meals with him rather than get them from the monasteries.  We aren’t sure why this is, but he sometimes arranges delicious food, and other times, we aren’t so sure.  This was one of those “not so sure” times.  Our meals were packaged on a Styrofoam plate wrapped in plastic wrap. 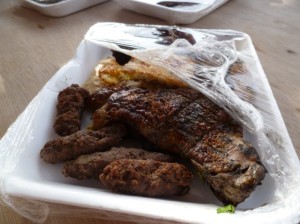 The food was not too bad, but the main question was, how safe was it?  We had no idea when it was cooked or how it could possibly be stored safely as we had been out and about since 7am that morning.  But we had eaten this food before and not had any trouble, so we dug in again.  We didn’t force the girls to eat too much of it, but they ate their fair share.

We finished our lunch/dinner and washed up and expected to be heading out shortly.  However, when I asked what time we would leave, he told me 6:15.  This was a little disappointing as I thought we were aiming to arrive back in Maadi around 7, but once again, we try not to expect anything too hard and fast.  Jayson disappeared for awhile with Layla and when I called him on his cell to locate him, he told me he was talking with a resident of the monastery.  I enjoyed the respite from holding and occupying Layla and enjoyed watching Emma and Hannah play with their new friends. (video clip)

When the bus did finally pull out of the monastery around 6:30, I settled in for a comfortable ride.  Layla did not need much coaxing to fall asleep in her car seat once again, and Hannah was out pretty quickly too.  Unforunately, the ride home took much longer than the morning ride as Cairo traffic added at least an hour to our trip and our family of five stumbled wearily into our home around 9:30pm.  I quickly got Layla ready for bed while Jayson tucked Emma and Hannah in, and all three were sound asleep within minutes.  It was a full and exhausting day on our Egyptian rihla.

One thought on “An Egyptian ‘Rihla’ (Outing)”