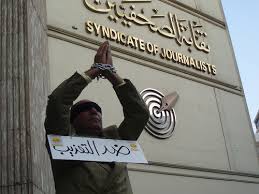 While Egypt is currently soul searching about its coming political identity, with Islamist governance among the many possible democratic choices, it is good to remember the suffering endured by these groups over the past several decades. The following excerpts are not meant to offer support for the Islamist cause, nor to deny that numbers of Islamists engaged in terrorist or violent revolutionary activity. Rather, it is an attempt to highlight the humanity of these individuals, especially in reference to the operations of state which dehumanized them.

The first selection concerns Kamal Habib, an active Egyptian jihadist from the 1970s. The excerpt comes from ‘Journey of the Jihadist’, by Fawaz Gerges. When asked, “Isn’t jihad by its very nature revolutionary rather than peaceful?” he replied:

We did not fire the first round in this battle. The rulers had closed all avenues for a peaceful transfer of power. We had no choice but to take up arms to raise Islam’s banner. The fight was imposed on us.

… Some of us arrived at different conclusions as to what could and should be done to resist aggression against our Islamic identity. The prison years also radicalized [the youth] and set them on another violent journey. The torture left deep physical and psychological scars on jihadists and fueled their thirst for vengeance.

Look at my hands – still spotted with the scars from cigarette burns nineteen years later. For days on end we were brutalized – our faces bloodied, our bodies broken with electrical shocks and other devices. The torturers aimed at breaking our souls and brainwashing us. They wanted to humiliate us and force us to betray the closest members of our cells. I spent sleepless nights listening to the screams of young men echoing from the torture chambers.

A degrading, dehumanizing experience. I cannot convey to you the rage felt by [the youth] who were tortured after Sadat’s assassination. Some left the prisons and the country determined to exact revenge on their tormentors and torturers. The authorities’ brutal methods nourished fanaticism and sowed the seeds for more violence and bloodshed.

Since the revolution, Kamal Habib is still prominent among his group, Islamic Jihad, which has abandoned violence and is seeking to form a political party. Among his recent statements has been a call to eliminate all foreign universities in Egypt, since they work against the development of Islamic thought.

The second selection is more recent, concerning the case of Adel Futuh Ali al-Gazzar, who was arrested following his return to Egypt after having been interred at Guantanamo Bay. The excerpt comes from al-Masry al-Youm, an Egyptian daily newspaper with an online English component.

Gazzar was picked up by US forces while working for the Red Crescent [the equivalent of the Red Cross in Islamic countries] in Afghanistan. He was transferred to a US prison facility in Kandahar, Afghanistan, where he was subjected to beatings, sleep deprivation, and other forms of torture, according to Reprieve, a UK advocacy group for prisoners’ rights. During this time, Gazzar lost his leg, which had been injured in a US bombing raid, due to lack of medical treatment.

He was then sent to the United States’ Guantanamo prison for terrorism suspects where he was held incommunicado for nine years. The Guantanamo bay prison camp has been widely condemned by US and international human rights organizations.

In 2010 the US government cleared Gazzar of the charges against him and released him to Slovakia. He was not repatriated to Egypt out of fear that he would be tortured.

According to the article, Gazzar had been convicted by an Egyptian court in absentia in 2001, concerning involvement in a plot to overthrow Mubarak. He was arrested at the airport so that the government would be able to assess his current legal status.

There is a current sentiment which imagines groups like the Muslim Brotherhood enjoy favor in post-revolutionary Egypt because they are best placed to both appeal to the masses on the basis of religion and secure the stability of middle and upper class economic interests. It is true that many leaders of the Muslim Brotherhood are businessmen of means. It is also true that many in Egypt accuse them of playing with religion in order to make money.

Yet like the Islamists described above, they have also suffered. Even though their political opposition was not violent, many, if not most, have spent time in prison. As such, an understandable premise is that Islamists have not accepted the fact of their oppression simply to make money. This would suggest that the above sentiment is wrong. It would suggest they have their eyes on full transformation of society, which would include a reshaping of the political system, with themselves, and those of like mind, the principle shapers.

If this interpretation would turn pragmatic and callous, it might suggest that such severe repression was necessary to keep their vision from being implemented, and might be necessary still. If it would turn cynical it might suggest that the Muslim Brotherhood should not be trusted when they make promises of sharing power; this could be a temporary measure in preparation for their ultimate designs. If it were to turn hopeful, it might suggest that having suffered, they would be loathe to inflict others with the same fate, and may indeed craft a system of governance resonant with Egyptian religious realities.

I do not mean to state I have a feel for which of these suggestions is closest to reality. Rather, I hope these portions serve only to lend a level of appreciation for the Islamists of Egypt. By all appearances, though appearances can be deceiving, they have suffered for what they believe in. While the power of conviction may make them dangerous, it also makes them worthy of respect.

Other articles and analysis may suggest ways in which they have manipulated, compromised, and disassembled throughout the years. For these, respect may possibly be withdrawn. Yet no man undergoes torture for only his self-interest. Suffering under conviction makes possible a wide and idealistic following. While this following should not be overestimated, neither should it be dismissed. If they are opposed out of fear, fear will bend before their courage. If they are engaged from appreciation, love is able to trump courage. It will do so in humility, weighing the worth of their convictions. Some may wither, others may remain.

Little else, and certainly not brute power, can challenge such powerful example.