Back in February I had the opportunity to participate in an Arab West Report interview with Abdel Munim Abul Futuh, a presidential candidate who was formerly part of the Muslim Brotherhood. At the time he was one of many. Though several candidates are still running, he and Amr Moussa, long time secretary of the Arab League, are considered the two frontrunners.

The interview was prepared by all but conducted by AWR Editor-in-Chief Cornelis Hulsman. The following are selections which I found most interesting. Please click here for the full transcript at AWR.

Egypt is currently deeply divided, including Islamists and liberals in the sense that many Islamists and Liberals primarily operate in their own circles. This also applies to many Christians. How would you be able to unite all Egyptians, regardless of their background, to rebuild the country?

First of all, your words that Egypt is divided are not right. Egypt has pluralism, but is not divided and the basis of pluralism in Egypt is political, not sectarian or religious, like many other countries. …

The Christian brothers after the Revolution left the “ghetto” [he means that they came out of their isolation] they were in before the Revolution. They became present in the Egyptian community, participating in political parties; they are present in the Freedom and Justice Party (FJP) and other parties, doing their work. Christians went from protesting inside the church to protesting in their community, the community of all.

The nation belongs to all Egyptians, whether they are Christians or Muslims, men or women, Islamists or they have Islamic, leftist, or liberal ideologies. This is the state of our community: I believe it is a positive and a vibrant state and does not engender any division—this expression is not accurate.

When I go in circles of course these people who are crossing the boundaries are definitely there, but there are many who are not and who are afraid and they lock themselves up in their community. How would you unify them? How would you be a president for all?

The most important trait he should have is seeking and achieving the independence of the nation, meaning that the strategic decisions of the presidency seeks the interest of Egypt only, not the interest of a specific political party, or any foreign body; the interest of only Egypt and the Egyptians. This, in itself, will unify Egyptians because it means that the icon that brings them together and whom they elected to be their leader, is seeking to protect their interests.

The second most important trait is that this president is reconciled with religion. Egyptian people, Christians and Muslims, are religious from the time of Pharaohs; they are a religious people, they love religion. We do not have extremist secularism in Egypt as there is in Tunis or Turkey, which is why it cannot be imagined that a president who is against religion or who is secular will rule Egypt. There is no way the Egyptian people are going to elect him.

The third important thing is that this president seek to deepen the meaning of citizenship, so that citizens may feel that they are equal before the law and that the basis for any Egyptian to apply for any position is his qualifications not his gender, faith, or political orientation. …

The fourth trait: When there is justice with the presence of a real independent judiciary, it will make the citizens, whose rights were violated by any means, to refer to the judiciary to take their rights. Then the nation will be independent and will grow and develop.

You mentioned on October 2, 2011 that you would appoint a Coptic vice president if you win the election and then the caliphate was mentioned. What are your thoughts on the caliphate?

In addition, we are not thinking about these matters now: Neither the unity of the Islamic world nor alliance, because we are occupied now with reforming the nation. What is the value of a unified world when it is ruled by dictators, corrupted, and diverted people? Of course it has no value.

Consequently, we are occupied with building our nation, not unity, unity with who? [laughing] Weak nation ruled by tyranny and corruption for 60 years! It is better to reform it and strengthen it before even thinking about cooperating with others.

According to Hasan al-Banna, founder of the Muslim Brotherhood, God has given Muslims the right of sovereignty and hegemony, what does this mean?

What is Hassan al-Banna saying? Is this book written by Hassan al-Banna? Ah yes, “Who are We and What do We Want”. That is not the meaning of the verse and when God says “…you will be witnesses over the people and the Messenger will be a witness over you.”

For more clarification, when Allah told his Messenger, the Prophet and the Greatest human being in the Qur’an, in the Holy Qur’an: “So remind, [O Muhammad]; you are only a reminder. You are not over them a controller.” Allah said to the Prophet that his role is to advise only! Nothing else! Not dominance, not control, not a guardian of people! …

“To be witnesses over people” has the same meaning that God told the Prophet which is to be an advisor, wise, and give advice to people, not more. The greatest thing that came in Islam is human dignity, which opposes the idea that some human being like me can be a guardian or I become inferior to him because he is a Muslim and I am Christian for example. Or he is better than me? Or he is more religious than me? Who makes him better than me? If he is better than me to God then it is between him and God! …

What kind of government does Egypt need in your opinion? One with a strong president (such as France, USA) or one in which the parliament has a stronger role?

What should be the role of the President and Parliament in overseeing the budget of the army? Would the army and police take orders from the President to maintain internal security?

Everything…the army is one of the power tools like the Ministry of Foreign Affairs. That is why the parliament should observe all these power tools whether it is the army, foreign affairs, police, etc.

How should Article 2 of the constitution function in your opinion? Especially since Article 2 was used in verdicts in courts where it concerns religious conversions.

Freedom of Belief in the Azhar document is not related to faith switching. Article 2 does not contradict with the Freedom of Belief. Islamic Sharia has been there in the constitution since 1971 and the Egyptian people, including Christian brothers, approve of it. …

What percentage of Egyptians is Christian and would you make public the figures of the number of Christians from the ID cards?

I am not occupied with the number of Christians or the number of Muslims, because in a nation that has citizenship these matters are not important. Publishing information as information regardless of the way it is used.

Wrong or right, it is the right for any citizen to obtain the information they need. It is not acceptable to hide any information from citizens. As for misusing this information to hurt the interest of the nation, it is another matter.

On May 16, 2011, you stated that you support full rights of conversion to any religion, saying the state should monitor this and not Church or Azhar. How would you guarantee that conversions would be fully voluntary and how transparent would state monitoring be?

I did not say “supervise” I said “enable” the state to protect the Freedom of Religion. It is not acceptable that if a Christian wants to convert to Islam, we ask the church and vice versa. It is a personal right. That is why the Azhar document that was signed by the Azhar, Pope Shenouda, Azhar’s Grand Shaykh, political party leaders, and myself is for the Freedom of Faith. It is not the role of the church, the Azhar or the state to supervise it.

What is your stance on the proposed unified law on building places of worship?

Egyptians do not need churches or mosques, they need farms, scientific research centers, colleges, factories, houses; but churches and mosques are not needed. None of the Muslims or Christians complained that they do not have a place of worship. These matters are unnecessary. The interference of the state in these matters is the reason of all the tension. 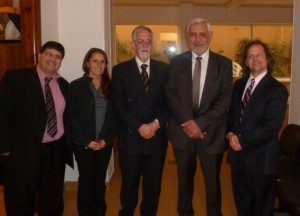 Read an article about this interview at Christianity Today, here.