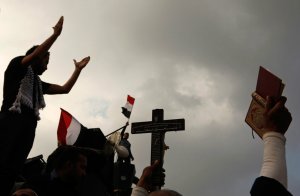 From my new article on Christianity Today:

The recent deaths of two teenagers best communicate the situation in Egypt today.

Gaber Saleh, a 16-year-old revolutionary activist, was killed in confrontations with police in Tahrir Square last Sunday. That same day, Islam Massoud, a 15-year-old Muslim Brotherhood member, was killed in clashes between supporters and opponents of President Mohamed Morsi in Damanhour, a city in the Nile Delta.

The deaths reveal a nation deeply divided by the decision of Morsi last week to appropriate all governing authority until a new Egyptian constitution is completed and a new parliament elected. Protests have broken out throughout the nation; Tahrir Square has once again filled to capacity. Many of Egypt’s judges have decried the attack on their independence, with the two highest appellate courts joining others in a nationwide strike.

The nation’s Christians are firmly in the opposition camp.

At least officially, Egypt’s Christians are not calling to depose Morsy:

“This is a national issue, not a Christian one,” says Safwat el-Baiady, president of the Protestant Churches of Egypt and a former member of the constitutional assembly.

“As Christians, we are not calling for the downfall of the president. And we do not fight against the authorities. As a church, we ask only for a suitable constitution for Christians and Muslims.

“But normal people have the right to be in the squares.”

Some, if not many, might hope for it, but the outrage is directed primarily at his constitutional declaration. It has led a vice president to resign from his administration:

Morsi’s opposition is not just in the street. Samir Marcos, Morsi’s vice president for democratic transition and the most prominent Coptic member of his administration, has resigned.

“I refuse to remain [in my position],” he told the international Arab newspaper Asharq Alawsat, “in light of this presidential decision that is crippling to the democratic transition process … and which is contrary to what I am trying to achieve through my position.”

This might also create a scenario where a weary public votes “Yes” in the constitutional referendum to follow, simply to end the deadlock and restore stability. In the process, liberals and Christians fear, the public would accept a flawed and religiously tinted constitution.

Of course, either way the people vote, a deadlock might continue. The Muslim Brotherhood will hold a rally on Saturday to support the president, whereas they previously canceled a competing protest out of fear for “bloodshed.”

“In order to save Egypt from going back to square one—dropping into chaos and nearly civil war—we have to think of a compromise,” said Sidhom. “But I fail to see how or where.”