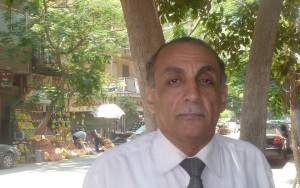 Hany el-Gezery, on the streets of Shubra, a Cairo neighborhood with a high percentage of Copts

From my recent article in Lapido Media:

Egyptian Christians celebrate the election of a new president in hope of a new dawn of equality.

Two days before the vote, Hany el-Gezery, the sixty year old founder of Copts for Egypt, announced the dissolution of his pioneering movement.

‘In light of our great confidence in the noble knight that will govern, whatever his name,’ he wrote in his final statement, ‘we call on all revolutionary and Coptic movements to follow our lead and stand as one to build the future of Egypt.’

Gezery began his activism in 2005 as one of the few Christians in the Kefaya movement opposed to then-President Hosni Mubarak. Throughout his activism he labored to involve Copts in the secular political struggle.

But in 2009 Gezery made a more direct religious appeal, partnering with an Orthodox priest to found Copts for Egypt. Fr. Mattias Nasr published a popular newspaper detailing cases of discrimination, but distributed it only within the church.

The alliance aimed to shift an emerging Coptic activism from church to street.

‘We were the first Coptic movement to work in the streets,’ Gezery told Lapido Media. ‘At that time no Christian was bold enough to even open his mouth, and any demonstration would be held inside the cathedral.’

Copts for Egypt differed by coordinating with opposition political parties to recognize and oppose discrimination within the Mubarak regime.

On February 14, 2010, they led the first Coptic protest outside church walls. On January 7, 2011 they concluded a week-long rally against the bombing of a church in Alexandria.

Eighteen days later the January 25 revolution erupted. Youth activists from Copts for Egypt were active throughout, going on to found or join many other diverse movements.

Gezery now calls for them also to end this stage of the struggle. ‘All Egyptians must dissolve back into society,’ he wrote, ‘which after June 30 is free from religious factionalism.’

On June 30, 2013 the popular revolt began against President Mohamed Morsi of the Muslim Brotherhood. After one year in office he was ousted by now president-elect Abdel Fattah al-Sisi, the landslide winner in last week’s elections.

In declining to name ‘the noble knight’ of his statement, Gezery was keen to emphasis his respect for both candidates, and rest his confidence on the era, not the man.

But the man causes worry among other Coptic activists, including his own disciples.

One of these activists is now the general-coordinator of the Maspero Youth Union. Another is an advocate for missing underage Coptic girls. Please click here to read their objections and the rest of the article at Lapido Media.