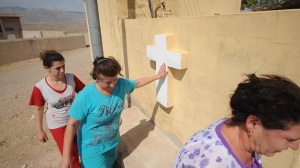 From my article at Christianity Today, published October 14, 2014:

“God is allowing ISIS to expose Islam,” said Khalil’s fellow pastor, Atef Samy. “They are its true face, showing what Islam is like whenever it comes to power.”

But the savagery of ISIS, which has overwhelmed Kurdistan with more than 850,000 refugees, has prompted other Middle Eastern Christians to embrace their Muslim neighbors. This theme was heard often from members of the Fellowship of Middle Eastern Evangelical Churches (FMEEC), who met in Cairo last month for a conference on the dwindling Christian presence in the region.

“We must be a voice for Islam,” said Munib Younan, bishop of the Evangelical Lutheran Church in Jordan and the Holy Land. “We must not allow the West to see ISIS, the Muslim Brotherhood, or others like them as the face of Islam.”

Others were more reflective of the diversity among both Muslims and non-Muslims.

The article opens with a brief description of an evangelical relief trip to help refugees in Kurdistan, which I also wrote about here. It also describes cooperation attempts in the Egyptian Family House, uniting Muslims and Christians, which I hope to profile in a few days. There are other strategies described by those who attended a recent conference in Cairo, whose opinions on US-led military action I wrote about here.

But please click here to read the full article at Christianity Today.