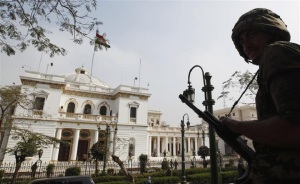 Ahram Online recently reported that Egypt’s minister of transitional justice appointed a military official as secretary-general of the parliament, now renamed the House of Representatives.

The news surprised me on different levels, most notably in that Egypt does not yet have a parliament. How can it then have a secretary-general? Whatever the position is, shouldn’t it be chosen by the parliament itself?

Eventually, it will be.

According to the executive regulations of the House of Representatives, issued in 1979, the speaker and his two deputies are entrusted with naming the House’s Secretary-general, but only under approval of two thirds of deputies.

“When a new parliament is formed in the first half of next year, the new speaker and his deputies will have the right to keep Al-Sadr in his position or name a new one,” said a legal expert with the House.

Much is open for debate about the composition of the coming parliament, but it may prove difficult to reach a consensus threshold, which may result in everyone agreeing to keep the acting secretary-general.

In a recent article, Nathan Brown argues that a similar pattern is emerging in which the executive branch issues laws which will eventually be subject to parliamentary review:

In the absence of a parliament, article 156 of the constitution gives the president the right to issue laws by decree provided that they concern emergency matters that do not permit delay and are submitted to the parliament for approval once that body has been elected and can meet.

Regardless of when parliamentary elections are held, the new body is unlikely to have either the coherence or the will to strike down legislation regarding purported emergency matters.

Brown sees this as an effort to preemptively establish authoritarianism, before the legislature can complicate policies:

For Sisi, there is also a temptation to use article 156 now, because it might soon become more difficult to enact authoritarian laws. Egypt’s 2014 constitution, like that of many other countries, often offers vague principles but defers the details to legislation. Aware of the way past rulers interpreted any vagueness in an authoritarian direction, the drafters of Egypt’s constitution inserted a provision (article 121) requiring that such laws giving precise meaning to general clauses—including those governing political parties, elections, the judiciary, and rights and freedoms—obtain a supermajority of two-thirds of the parliament.

The effect of this will be to keep any existing law frozen in place until the new parliament can organize such a vote. But it also gives the president a golden opportunity in the current interregnum to modify any law he likes before the parliament meets, without having to face this threshold. It remains unclear whether the parliament will have to muster such a supermajority to approve the laws when it does sit.

Regardless of the correctness of this opinion, it appears the government’s appointed secretary-general will have a good deal of bureaucratic influence on the workings of parliament. Returning to Ahram Online:

The previous secretary-general held his position for many years, both under Mubarak and the Muslim Brotherhood-led parliament. He was a former judge, and may have been little more than an expert functionary.

But if the new expert functionary comes from a military background, what degree of supervision/control/influence will the military have over parliamentary affairs? Will it matter?

I am not an expert in the inner-legislative workings of any nation, and certainly not yet of Egypt. Anyone with more experience is invited to explain if this position is essentially irrelevant, or the lynchpin of efficient political process.

One thought on “Who Will Run Egypt’s Parliament?”