As Egypt mourns the victims killed by the so-called Islamic State branch in Libya, the Coptic Orthodox cathedral has been a center of attention. Every day the official spokesman has issued press releases and pictures updating the situation; all photos that follow are credited to the Coptic Media Center.

On Friday, February 13, following the announcement by the Islamic State that they were holding 21 Coptic Christians, the cathedral permitted their families to hold a small protest.

On February 14, Prime Minister Ibrahim Mehlab met with the families, promising best efforts and to take care of them while in Cairo.

On February 16, after the Islamic State released its video of beheading its victims, President Sisi visited Pope Tawadros to express his condolences.

He was followed by Prime Minister Ibrahim Mehlab.

Also offering condolences was a delegation from the military, including the Minister of Defense, Sedki Sobhi.

Also paying condolences were the ministers of social solidarity, health, and youth. 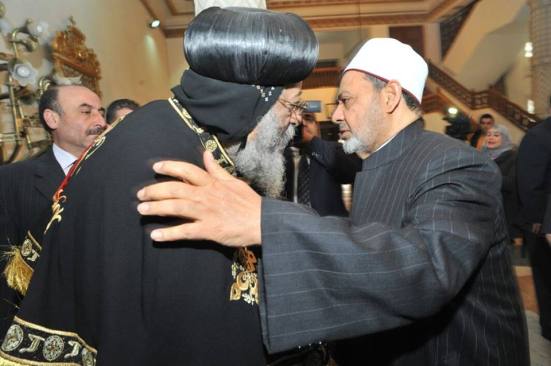 Following these was a delegation from the Azhar, including the Grand Sheikh Ahmed al-Tayyeb.

Later that evening Pope Tawadros received the condolences of the US ambassador, R. Stephen Beecroft. 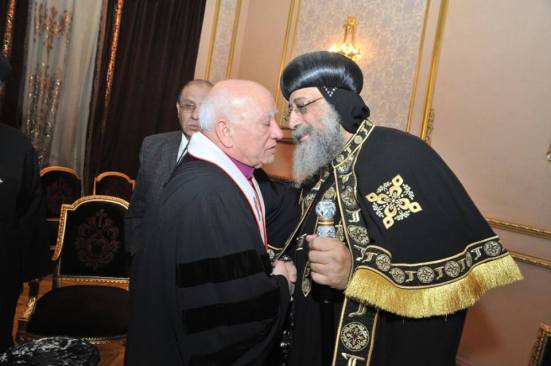 Also offering condolences was a delegation from the Protestant Churches of Egypt, headed by Safwat al-Baiady. 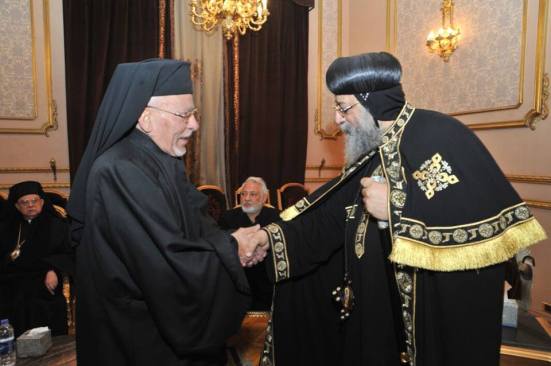 Prime Minister Ibrahim Mehlab and Minister of the Interior Mohamed Ibrahim and the governor of Minya visited Bishop Paphnotius of Samalout to console the families and promise the state would build a new church in the name of the martyrs.

The link given above is to the Facebook page of the official spokesman of the Coptic Orthodox Church, which contains pictures of many other visits.

Christians in Egypt have taken great comfort in the expressions of sympathy from state and Muslim citizens alike. It is a difficult time for the church, but the tragedy is serving to unite the nation.

‘in all things God works for the good of those who love him, who have been called according to his purpose.’