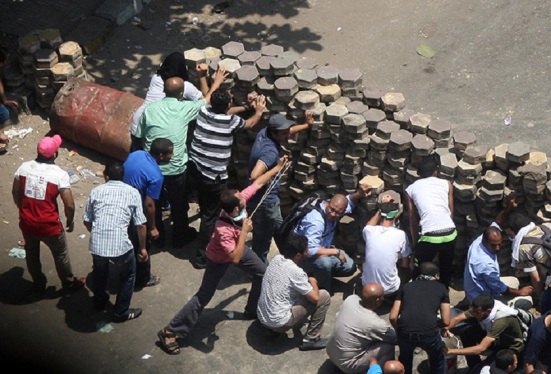 Omar Ashour is an academic at the Brookings Institute who recently published a paper entitled, ‘From Collusion to Crackdown: Islamist-Military Relations in Egypt.’

It is an insightful retelling of two epochal moments in history, the 1952 Free Officers revolution and the 2011 Arab Spring. In both, he details how the military establishment and the Muslim Brotherhood cooperated, maneuvered, and eventually clashed.

History is contested, so those who either lived through or studied carefully these events are invited to weigh in on the anecdote that follows. But in understanding Brotherhood resistance following the June 30, 2013 protests against Morsi, this detail risks being overlooked. I, at least, had missed it.

According to Ashour, the Muslim Brotherhood was an intimate partner with the Free Officers, but then tried to resist Gamal Abdel Nasser as he consolidated power outside of democratic procedures.

At one crucial moment the Brotherhood helped organize a demonstration against him, calling for (among other things) the army to return to its barracks.

Nasser asked Abdul Qadir Audeh, the Secretary-General of the MB, to dismiss the protesters. Audeh complied, hoping to reach a compromise, but was arrested that same night by Nasser’s loyalists in the military police and was executed a year later.

Sound familiar? In 2013 the Muslim Brotherhood did not accept the ouster of Mohamed Morsi on July 3 despite the massive protests against him. Right or wrong in this decision, this is an important distinction between 2013 and 1954. The sit-in in support of Morsi had formed to counter these protests, and continued into mid-August. During this time there were intense negotiations between the two sides, with active participation of foreign diplomats.

During negotiations the Brotherhood was urging on participants to stand firm, even to the point of martyrdom. This is well known. But in connection with the anecdote above, this detail escaped me.

On July 17, 2013, Audeh’s son Khaled, a university professor, reminded the hundreds of thousands of protesters in Rab‘a Square of that mistake. “Our stance here is our way to success. I swear I will never dismiss you like my father, the martyr Abdel-Qadr Audeh, dismissed the protesters on 28 February 1954…. They tricked him and told him to dismiss the protestors and that the army would go back to its barracks and democracy would be resumed. He believed them. And then he was arrested at night and executed afterwards.”

It helps put in perspective the psychology of the Brotherhood.

Ashour’s paper considers the removal of Morsi to be a coup, for those who take offense at this designation. But it also demonstrates the Brotherhood’s claim to be a martyr of democracy is overly simplistic. For example:

By December 1952, Nasser made it clear to the MB that there would be neither free elections nor a re-installation of civilian leadership. In January 1953, the RCC dissolved and banned all political parties in Egypt. The MB did not oppose this decision because it did not affect them (they were not a political party) and also to avoid a costly clash with Nasser’s powerful faction in the RCC and the army, an opportunistic stance that would prove costly in the future.

There is another important difference between the two episodes, as the Brotherhood did not initiate the protests of 2011, joining later. But they soon demonstrated a spirit of collusion with the military, ranging from cooperation to non-confrontation. Different examples are given, but here is one sometimes forgotten.

In June 2012, a SCAF decision dissolved the lower house following a constitutional court ruling that part of the electoral law was “unconstitutional.” This decision vested all legislative powers in the SCAF only days before Egypt’s first civilian president was scheduled to take office on June 30, 2012. It was, in effect, a bloodless coup, one that passed without any international condemnation and limited domestic criticism. Because the winner in the parliamentary elections, the MB, had also won the presidency, it did not mobilize its supporters and coalition partners [against the decision].

The Brotherhood may argue it was trying to be pragmatic, accepting defeat against a stronger foe in hopes of fighting another day with a stronger hand. Perhaps. But the details Ashour provides help recount a history that is not clean and principled. This is important to remember given the righteous garb the Brotherhood now seeks to don.

In the struggle for power in Egypt, democracy is a tool. But it is only one among many. That it is the preferred tool of the Brotherhood should not lend them greater favor. It is a bare-knuckled fight, and right now they are losing badly. But they chose to step into the ring, and have grappled along with the rest.

Without granting good intentions to either the military or the Brotherhood (which may be there), let there be some sympathy. Every fight has its principles. Every struggle for what is right is met with temptation to embrace some wrong.

Be careful, oh outsider, about taking sides. For Egyptians of course it is a different matter entirely.