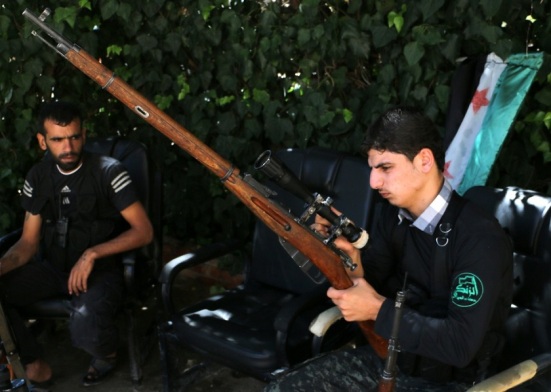 A fighter from the Nureddine al-Zinki unit, a moderate Syrian opposition faction affiliated with the Muslim Brotherhood and made up of former Syrian Free Army fighters, 11 September 2014 (AFP) – See more at: http://www.middleeasteye.net/news/syrias-muslim-brotherhood-appoints-new-leader-1320475160#sthash.GICBoIS1.dpuf

If you read this headline you might hope they intend it to lead in one of two directions. First, as a call to the government to stop persecuting peaceful movements. Second, as a call to their own violent wing, to keep Egypt from such a scenario.

Unfortunately, you would be wrong, according to this voice – unnamed – in a recent analysis by Sada on the post-pacifist Brotherhood.

The way many Brotherhood leaders are framing this is that if there is a war between society and the state, and if the society has taken a stance, the Muslim Brotherhood should not hinder society’s fight for freedom.

“We should not stand silent in this battle,” said an Istanbul-based consultant for the newly-elected executive bureau. “The vacuum should be filled by a powerful organization, and we will not repeat the mistakes of the Syrian Muslim Brotherhood (SMB),” he added.

The consultant was referring to the fact that the SMB lost their support in Syria because they distanced themselves from the chaos during the early stages of the revolution.

Whoever this voice is, he appears well-placed and influential. And potentially, a menace.

In 2012 the Syrian Muslim Brotherhood issued a covenant and charter in which they laid out their post-Assad vision. Early on they were politically influential.

But they also joined in the violence. Apparently, they weren’t good enough at it. After suffering considerable losses they now appear to be a negligible force on the ground.

The Egyptian Brotherhood, according to this consultant, might be seeking to get ahead in the game. That is, it seems, to become influential in insurrection.

The Muslim Brotherhood appears to be an organization in flux and much internal dissent. The unnamed consultant’s open-ended phrasing should not be taken as definitive. But it is terribly disconcerting. For the record, Yehia Hamed, former investment minister under Morsi, denies there is a trend within the Brotherhood that wishes to arm the revolution.

But according to this article in Carnegie, there is indeed a trend though in substantial minority status:

In addition, the proportion of members within the Brotherhood who want to bear arms appears to be relatively small. In a survey held at a meeting of the Brotherhood’s youth cadres in one of the Egyptian governorates, less than 30 out of 300 members who attended the meeting were in favor of armed action. The others preferred to continue their work on the ground using nonviolent means.

Egypt’s current difficulties are the fault of many. But until now Egypt has avoided the fate of its neighbors in Syria, Libya, and Iraq. The Brotherhood, even here, does not seem to be wishing to turn Egypt into a quagmire. Their argued justification might be that if it can be in the forefront of a militant rebellion, it can keep it from transforming into an Islamic State nightmare.

But that they would even take a step in this direction betrays all the rhetoric of ‘peacefulness’ issued from the start of the revolution. It shows it as a tactic, not a conviction. It wants to lead, and at least as this consultant is concerned, it is willing to lead in violence if necessary.

Many Egyptian anti-Islamists have long argued this is the nature of the Muslim Brotherhood. But their pacifistic political participation has been the norm for decades. I don’t think the West and the academic community was wrong to discount it out of hand.

But perhaps their behavior in Syria spoke otherwise, and no one was listening.