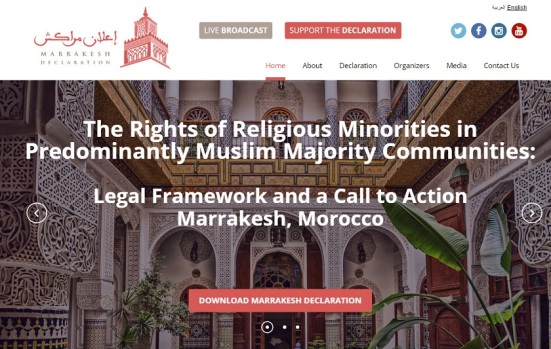 This article was first published at Christianity Today in the April print edition.

With the lilt characteristic of a Southern megachurch pastor, Bob Roberts Jr. introduced the most significant Muslim statement on religious freedom in 1,400 years.

“I am a Texan, an evangelical, and a Baptist,” the NorthWood Church leader told the crowd of more than 250 leading Muslim clerics from around the world. “You have made my job to build bridges so much easier. You have gathered to call people to change.” He drew hearty applause.

The Marrakesh Declaration, launched in Morocco this January, is a clear English-Arabic condemnation of terrorism and a pledge to better promote religious liberty.

“It is a very promising initiative. You could even say it is groundbreaking,” said Medhat Sabry, the Anglican Communion’s dean for Morocco and one of several non-Muslim observers (alongside Roberts) to the declaration’s signing. “But it is way too early to tell.”

This is because—from Cairo to Amman to Nazareth to Baghdad—the news caused barely a ripple in Christian communities in the Middle East and North Africa, whom the document is meant to comfort. Some Arab Christians saw a headline in the local news. Others didn’t hear of it at all.